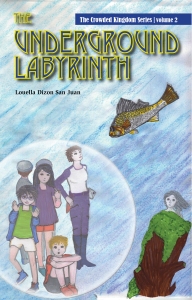 The Underground Labyrinth has just received a nice plug in the February 2015 issue of The Midwest Book Review’s Children’s Bookwatch!  This is the second time that Midwest Book Review has picked up a Crowded Kingdom book; the first review, which you can read here, was for Volume 1 of the series, The Crowded Kingdom.  Here’s the UL blurb from the February 2015 Children’s Bookwatch Fantasy/Sci Shelf:

The summer is off to a terrible start for Jinny, with bad weather and a cancelled birthday party. It hardly seems a year ago that she had gone on an adventure with her sister Jada, the rebel fairy Minacrist, and the magical people they met within the secret fairy kingdom of New York City. But when a mysterious river man appears with a special key, Jinny, Jada, and their neighbor, Sam, are pulled into a race against time. A sickness has struck the kingdom, turning good fairies into evil, and the children must join forces with Minacrist and their elfin friends to find the source of the Black Power…before the Black Power destroys them.

Great plug!  But What Is The Midwest Book Review?

The Midwest Book Review is a wonderful organization established in 1976 by James A. Cox, committed to promoting literacy, library usage, and small press publishing, and as such provides a broad range of book review magazines for community and academic librarians, booksellers, and the general reading public.  The nine monthly review publications are:

The Children’s Bookwatch has reviews of books, music, games, and DVDs for preschool through young adult readers, for titles deemed suitable for family, school and library collections.  It was an honor to see Underground Labyrinth listed on their Fantasy/SciFi shelf.

(I’ve also found that reviews in the Midwest Book Review and the Children’s Bookwatch are indexed in the Book Review Index, a comprehensive guide to book reviews that includes more than 5 million review citations from thousands of publications, and is therefore a resource for publishers and librarians to reference a book — which could be your book!)

In addition to reviews, the Midwest Book Review has a thoughtful selection of advice articles for Writers/Publishers that I find quite practical, such as the recommendation to give your best when writing a press release, because so often that press release is used directly in the review (just as we see above).  In other words, you should expect to read what you have provided as a summary of your book, so you better be pleased to have it represent your book wherever it appears!

So add the Midwest Book Review to your list of resources as a reader, a writer, a self-publisher, or simply an ally of the written word.  I recently read an interview of its founder and editor-in-chief, James A. Cox, where he stated two things that stayed in my mind:

What better expression of passion for the written word than that?